Be the first to review this product
£16.99
Out of stock
SKU
ASMDOBFR201EN 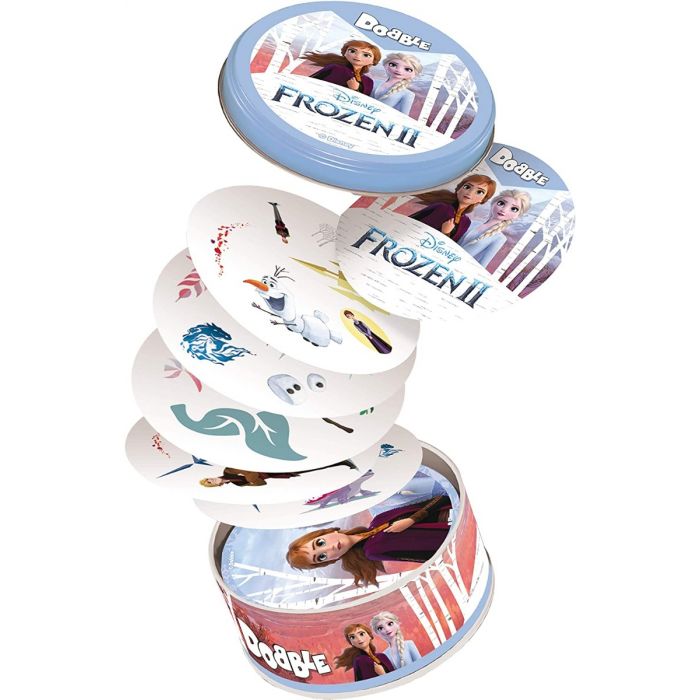 From Elsa to Anna via Olaf, all of your favourite characters from the hit Disney animated film are waiting to join the Dobble fun as Frozen II meets the smash-hit game of speedy observation!

Each of Dobble's 55 cards has eight different symbols on it but, between any two cards, there is always exactly one matching symbol. Across a variety of mini-games, the aim is the same - be the first person to spot the match and call it out! Test your reflexes and your keen eye.

You'll recognise the symbols from the beloved Disney movie, but the match can be surprisingly difficult to spot! The size and positioning of the symbols can vary on each card, so you'll need to pay close attention if you're going to call out the answer quickly.

Dobble Frozen II is perfect for playing with friends and family. Anyone can learn and players of any age can win! It only takes five seconds to teach, so you can get straight to the fun.

Five different games in one box! With simple rules for a variety of mini-games, Dobble Frozen II remains exciting to come back to again and again. You'll be determined to prove your observation skills and conquer all five ways to play.

Dobble Frozen II can be played with up to eight players at once, meaning that gameplay is always fast, hilarious and, above all, ridiculously fun!

The deck of cards is protected inside a small circular tin to keep them safe. It makes Dobble Frozen II the perfect travel game that you can take anywhere! Games are fast, so you can grab it for a quick fix on the go or enjoy game after game wherever you are.

If you can't get enough of the addictive gameplay, explore the rest of the Dobble range! Try the original game, check out more licensed editions including Harry Potter and The Gruffalo, introduce younger children to the fun with Dobble Kids, and much more besides.