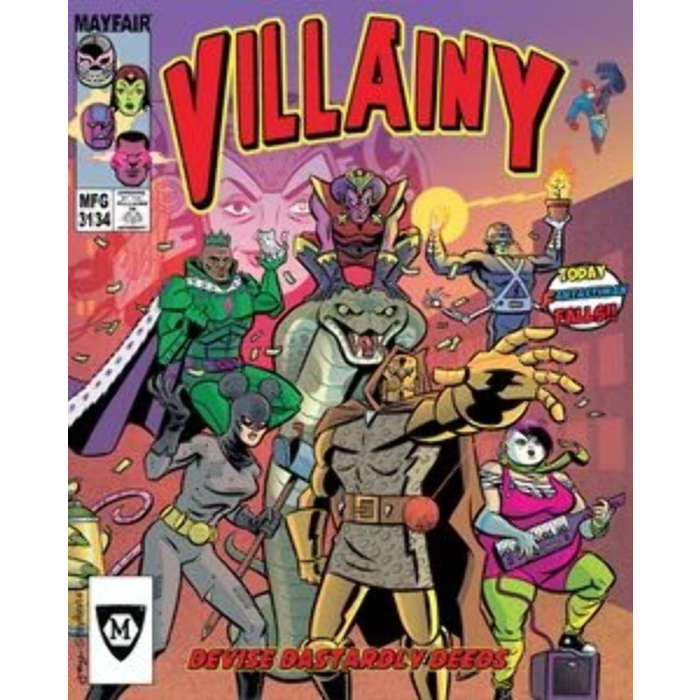 Villainy is a game about aspiring super villains competing to be the first to enact their evil plans and overcome Fantastiman, that pesky superhero who watches over the city day and night. It is a fun card-driven character building game featuring a hilarious uncontrolled narrative that unfolds differently every time.

As an aspiring super villain, you are trying to make your mark in the world. In Villainy you are trying to be the first villain to complete three plans to beat Fantastiman, that pesky super-hero who watches over the city day and night. You must hire minions to aid you in your quest for world domination. You will have to do crimes and go to work as your alter ego to learn the skills necessary and gain the cards required to see your great plans through to their triumphant end.

Today is the day that Fantastiman will fall...

In Villainy, players gradually build a stronger team of villains. Each turn, players typically perform a single action which may include purchasing a new team member with money, increasing one of four team member's stats, earning money, and completing objectives.

Each team member has three primary stats: strength, charisma, and intelligence. In addition, they can each acquire 6 abilities such as a scientific knowledge or the possession of a weapon. Team members can also gain an additional special action and extra income by purchasing an alter ego card such as a software engineer.

Players draw an initial objective card that describes minimum statistics and abilities a team must have to complete that objective. Players then spend turns building their team to meet those requirements. There is a pool of characters a player can purchase with money. There is another pool of crimes and alter ego cards that a player can select and which will provide money or increase a team member's stats. These pools will cycle throughout the game and choosing which cards to select and which characters to purchase are important to building a strong team.

Once the requirements are met, they may spend a turn to complete the objective. The first two objectives are met simply by having a team with the right requirements. The third in addition to having these requirements includes a mechanic where the team fights against Fantastiman. During this third and last objective, players will draw random challenge cards that may decrease their team stats and abilities. If the team overcomes these challenges and still meets the minimum requirements, they can then complete the fight by rolling a high value with a dice.

The first player to complete all three objectives is the winner.

There are additional challenges or fights which occur both randomly and as a player's action throughout the game. Typically these fights award a bonus to one player without hurting another. It is these challenges and several special abilities that steal from other players that make up the majority of player to player direct conflict